From the Desk of SoperWritings 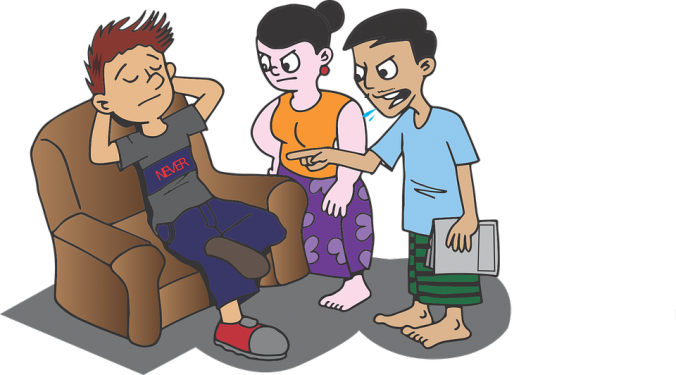 Discussing Disappointing Grades with a Teen

When schoolwork starts to slip, stress levels tend to rise for both teens and their parents. In the upper grades, academic progress can have a direct impact on things like job prospects and getting into college. This can make discussing disappointing grades with a teen even more stressful.

Getting angry with a teen can be a fruitless exercise.

At the most basic, Freudian level, the adolescent ego and super-ego are fragile, newly-developing messes trying to keep a more developed id (the inborn impulsive, aggressive, pleasure-seeking part of our personalities) in check.

What this means is that when a teenager is faced with a perceived serious confrontation (like an argument over poor grades), they are most likely to devolve to a basic, yet intense fight-or-flight response.

By the teenage years, kids know how to spot when a potential conflict is coming. In the case of school issues, they will typically know more about the conflict than a parent does. They will probably even know precisely when a parent will find out the upsetting news.

This means a teen is coming to such a discussion pre-primed to hash out a fight or to retreat from it altogether. It’s not really by choice; teenage brains are programmed that way.

As an adult, the key is to approach a discussion about disappointing grades as a level-headed, problem-solving exercise rather than an emotionally-charged fight about guilt or fault.

The crux of any conversation about schoolwork should always boil down to figuring out whether disappointing grades are a result of a lack of effort or simply working to ability. This can be hard for an adult or parent to evaluate on his or her own, but there are some easy, tell-tale signs if there is a lack of effort afoot:

If these more obvious signs aren’t showing up, a conversation with a teen’s teacher(s) can always provide some valuable insight. Regardless of the causes of a lack of effort, however, there is value in expressing honest disappointment and seeking to correct the behavior.

Keep in mind, sometimes a lack of effort in school can be a reflection of deeper issues brewing underneath; therefore, the worst thing to do is ignore it. Instead, draw attention to it, and create a plan to correct it.

But what if a teen really is giving their best effort?

Initially, celebrate the effort and sympathize with the struggle. However, stopping there would be a disservice.

This should be the launching point for an honest conversation of how to best offer help and support moving forward. Ultimately, you can teach a child to be a positive self-advocate.

Depending on the types of struggles a teen is facing and the way the educational system works in his or her area, there are a number of different avenues to explore to help a struggling student push beyond the frustrations of poor grades (regardless of the cause). Some of the avenues worth exploring would be:

In the end, do not let a conversation about disappointing grades close without some type of actionable steps in place; otherwise, you are likely to end up in the same spot having a very similar conversation in the near future. It is crucial to get involved and show a teen that you are there to help them succeed, not lurking in the shadows, waiting to punish and admonish failure.

How have you been able to have successful conversations with teens or their families about disappointing grades? Share your experiences with our community by leaving a comment below!

The latest posts delivered to your email. No Spam. Opt out any time.

Theme by Anders Noren — Up ↑